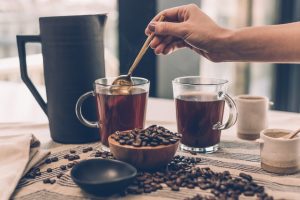 Coffee is the drink that most Brazilians love and that is served in small cups or even large cups. There are those who can’t start the day without a cup of coffee or those who don’t even talk in the morning if they don’t feel that delicious smell and the hot coffee in their mouths. For the incurable coffee lovers, anytime is the time to drink it.

The love of drinking can be something almost universal and known to everyone. But few people know what symptoms it can cause in our body. The caffeine can actually be a great thing. But it can also work against people. The experience will depend on the person’s body and how much it absorbs.

Caffeine is a chemical with a bitter taste that is related to the nucleic acid bases adenine and guanine. It is produced by various plants as a way to prevent herbivores from eating its leaves or seeds.

However, we humans love to consume it. In fact, caffeine is the most used psychoactive substance in the world. Having four out of five adults consume it, whether hot or cold, like coffee or soda. And in many cases, caffeine consumption is aimed at preventing sleep.

Simply put, the stimulation happens because of caffeine’s similarity to a chemical that we produce to slow down the firing of the nerves. By interfering with this chemical’s slowing effect in the brain, neurons remain active where they would otherwise be slowing down. So this generates a chain reaction that can promote a “fight or flight” response throughout the body.

By allowing certain nerves in the brain to continue firing at a relatively fast rate, we are actually telling other circuits, such as those connected to the pituitary gland, that something exciting is going on.

Therefore, it responds by releasing epinephrine, which is a hormone that generates responses we may need in times of stress or danger. In addition, the heart beats a little faster, the pupils dilate, blood is diverted to the muscles, and stored carbohydrates are released from the liver.

Generally, most people are in the habit of consuming the equivalent of one to four cups of coffee a day, which is approximately 400 milligrams of caffeine, in a 24-hour period. At this amount, people face no obvious health risks.

A small amount of caffeine may actually have some small, but not negligible, benefits. For example, preventing heart disease, helping your muscles burn calories and possibly increasing your chances of living longer.

However, it is necessary to have a caveat, the habit of drinking a glass a day can produce physical dependence. And her abstinence is punished with headaches, lethargy and irritability.

And having a habit of drinking more than a few cups a day, or one that involves adding piles of sugar or other additives to your diet, can wipe out the benefits pretty quickly.

Plus, there’s the fact that adenosine is actually doing the body a favor and preparing it for the necessary amounts of sleep a person needs to clear the brain and repair the body.

The lethal dose of caffeine, with reported deaths, is a concentration of 80 to 100 micrograms of caffeine per milliliter of blood. For this, you would need to consume approximately 10 grams of pure caffeine, which is quite difficult with coffee alone. However, it is important not to be irresponsible with drinking.